“Michael Birrer’s scientific corpus is incredibly impressive, and the ways he has found to improve cancer care have saved thousands and thousands of lives,” said UAMS Chancellor Cam Patterson, MD, MBA and CEO of UAMS Health. “I look forward to everything he continues to do for our patients and improve cancer care.”

The NCI designation is awarded in a highly competitive evaluation process in which cancer centers must demonstrate an outstanding depth and breadth of high-quality cancer research. Preserving the designation brings significant benefits, including the ability to access federal research funding and offer clinical trials that are not available for non-designated centers. It is also expected to have an economic impact of $ 72 million on Arkansas and create approximately 1,500 new jobs over five years.

“I kept getting asked why I would leave Harvard and go south and go to UAMS,” Birrer said. “Every time I smiled and simply said: ‘Because the need is there.'”

“Think about the cancer needs in the state of Arkansas,” said Birrer. “The underserved, the economically disadvantaged, the geographically isolated – many sections of the population who urgently need modern cancer treatment and access to highly qualified oncology. I can’t think of a better legacy than bringing an NCI designated cancer center to Arkansas. That’s why I’m here. It is a truly sacred mission, it is God’s work. I will never stop chasing it, never. “ 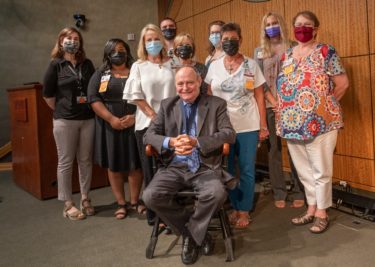 An endowed professorship is one of the highest academic awards that a university can bestow on a faculty member. A prestigious chair is established with donations of at least $ 1 million that are invested and the interest proceeds used to support the chair holder’s educational, research, and clinical activities. The professorships are among the most respected scientists, physicians and professors in their field.

Established with a $ 500,000 challenge gift, the chair honors Kent C. Westbrook, MD, founding director of what is now the Winthrop P. Rockefeller Cancer Institute and a distinguished professor in the Department of Surgery at the UAMS College of Medicine . He received the College’s Distinguished Faculty Award in 1978 and the Distinguished Faculty Service Award in 2013.

Born in Clarksville, Arkansas, Westbrook graduated from UAMS in 1965 as the first in his class. After completing his residency in general surgery at UAMS, he completed a fellowship in surgical oncology at the MD Anderson Cancer Center in Houston. He returned to Arkansas to work with his friend and colleague, cancer surgeon James Y. Suen, MD, to establish a cancer program so Arkansans would not have to leave the state for treatment. Westbrook worked with colleagues during much of the 1970s and early 1980s to develop comprehensive cancer programs at UAMS, culminating in the establishment of the Arkansas Cancer Research Center, the predecessor of the Cancer Institute, in 1984. Westbrook was a founding director for 14 years.

“It is fitting that this chair should stand on behalf of someone who shares these values ​​in helping Arkansans: Kent Westbrook, someone who has made a powerful contribution to the Winthrop P. Rockefeller Cancer Institute. Thank you Kent for all of your efforts and all that you have done. If I keep looking, it’s because I was standing on your shoulders. “

“DR. Birrer, I want to thank you for your outstanding leadership and hard work as we pursue the NCI award for UAMS,” said Susan Smyth, MD, Ph.D., UAMS Vice Chancellor and Dean of the College of Medicine. This ceremony is an opportunity to reflect on the history of the Cancer Institute and, most importantly, the tremendous influence that Dr. Kent Westbrook had at UAMS, and to thank him for the visionary work he and Dr. James Suen did many decades ago have started. “.”

“I owe much of my success in medicine to Mike for his advice, mentoring, and collaborative efforts,” said Don S. Dizon, MD, professor of medicine at Brown University, director of women’s cancer and hematology-oncology outpatient departments at Lifespan Cancer Institute and Director of Medical Oncology and Sexual Health Oncology Program at Rhode Island Hospital in a videotape. “I just want to say how proud I am to know you and how proud I am that you have landed in such a wonderful institution that I know will help to grow and develop.”

“Mike is one of the most influential mentors I’ve met and I know I wouldn’t be here today without his relentless support,” said Marcela G. Del Carmen, MD, MPH, Professor of Obstetrics, Gynecology and Reproductive Biology of Harvard Medical School and Chief Medical Officer of the Massachusetts General Physicians Organization, in a video recording. “He was truly a forerunner in his commitment to women’s health, advancing the care of our patients with gynecological cancers, as well as advancing women’s careers in medicine. I stand before you today and pay tribute to this legacy and commitment throughout his career. “

In addition to the honor as professor, Birrer received a commemorative medallion and a wooden chair with inscriptions. He thanked his family and recognized Patterson, Christopher Cargile, MD, director of the Behavioral Health Service Line, and Steppe Mette, MD, CEO of the UAMS Medical Center, for recruiting him to the UAMS.

“I have been blessed all my life, and now you have given me the opportunity to do my life work,” said Birrer. “I thank you.”

Birrer studied at the Rensselaer Polytechnic Institute and graduated with a Bachelor of Science in biology. He completed his medical degree and PhD in philosophy in 1982 from the Medical Scientist Training Program at Albert Einstein College of Medicine, New York. After completing a medical internship and residency at Massachusetts General Hospital, Birrer entered the Medical Oncology Fellowship program at the National Cancer Institute in Bethesda, Maryland. After his fellowship, Birrer was appointed lead investigator (with tenure) and built up the molecular mechanisms division in the cancer prevention and control division.

In 2008, Birrer was appointed professor of medicine at the Harvard School of Medicine, serving as director of both gynecological medical oncology at Massachusetts General Hospital and the gynecological oncology research program at Dana Farber / Harvard Cancer Center.

In 2017, he assumed the position of director of the O’Neal Comprehensive Cancer Center at the University of Alabama in Birmingham, where he was professor of medicine, pathology and obstetrics.

Nationally and internationally recognized as an expert in gynecological oncology, Birrer’s main research interest lies in the characterization of the genomics of gynecological cancers in order to improve the clinical management of these diseases. His clinical interests include ovarian cancer, endometrial cancer, and cervical cancer.

Reiki: What’s the various remedy and does it work?

ABOUT US
Provides News Related to Alternative medical systems, Biologically based treatments, Energy Therapies, Mind-body interventions, Manipulative and body based Treatments
FOLLOW US
© Copyright 2021 - All Rights Reserved By Camcancerhub.com